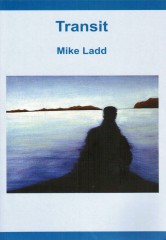 A pivotal tenet of this collection suggests that we are in transit, passing through, all on different stages of ‘the journey’, all interconnected in various ways. Natural and human worlds are interwoven, but sometimes, humans are diminished against a background of loftier, more enduring forces. This suggests a strong philosophical undercurrent in Ladd’s approach.

Mankind is diminished not only by contrast with a purer natural world, but also by an innate propensity to weakness, or worse, to evil. Although many poems reveal sharp insight into human foibles (social occasions are often depicted with irony) there is warmth and compassion in Ladd’s observations. Sociopolitical comment surfaces in poems like ‘Night and Darkness’, where he touches on the evils of Abu Ghraib and Guantanamo Bay. ‘You are tied and suffocated in a bag./ Night and darkness seep into the day.’ The danger with this sort of comment is that too often the observations seem facile or strident. This is especially so in poems like ‘Sky People’ and ‘Housing Estate in the Howard Era’: ‘Fat-arsed cars are the local gods / and double garages their shrines.’ The same applies to ‘Headlands 2’: ‘The hill on which nothing happens / holds its rich, secret lives, / its little universes, / until the bulldozers arrive: / the supernova of real estate.’

More successful in terms of social observation is ‘Junior Football’ where coaches, relatives and suburban parents are sharply caricatured, while Ladd captures great visual and aural imagery: ‘The rumble of the boots like horses’ hooves,/ the thump and tumble of the ball…’ ‘Afterlife’ captures the sad repetitiveness of rural funerals where final tributes are paid with affection and where mourners are comforted by the unfailingly maternal women like ‘…Edna, Pearl and Beryl, …’ with their sandwiches and biscuits.

‘Relief Teacher’ verges on stereotyping, but is astute in capturing the ‘voice starling thin’ and the ‘too-hopeful grin’ of the hapless ageing male substitute teacher. ‘Reunion’ has cleverly unified imagery and some unexpected observations, but the outcome is a bit predictable, even though a nice narrative tension is established. The half rhymes work better here than full rhymes which are elsewhere at times slightly contrived, rather mechanical.

The pervading feeling is that Ladd is fairly disenchanted with contemporary society, especially bourgeois capitalism; a mordant haiku, ‘Black’, is an especially powerful indictment of man’s abuse of the environment.

Sometimes underlying these poems one senses a spiritual dimension. Ladd, often physically in transit, covers many geographical locations, only to find a common motif. ‘Mars and Insomnia’, another short poem, very effectively places the insignificance of humans against a cosmic background, while ‘Morquong’ expands the vastness of space and time in the Mallee salt lake district. The loneliness of a sensitive soul alienated from the corporate urban milieu reaches out from ‘A Window in the Bronx’. In ‘Rhapsody in Port Moresby’, the ‘expats’ are ‘trapped between love and contempt’, while ‘The seki man, guarding a warehouse of boredom,’ plays ‘a mournful tilatilo flute to himself’, as ‘A little bat flies under the cargo moon / that shines on the bars of the rape-proof room…’

A central element in all these transitory experiences suggests that there is more to the universe than our banal western existence; however, a shared humanity can help us endure. And if we open our eyes to the rest of creation, we could learn from swallows, bats, cormorants, even amaranthine flowers. More significant, paradoxically, are the ‘insignificant’ creatures who don’t draw attention to themselves; this is beautifully celebrated in the poem ‘In Praise of the Colour Grey’: ‘The fur of night animals/powdery, speckled, moon-strays.// Dull birds with glorious songs./ Blue Whales, mostly grey.’ Here, Ladd skilfully masters the rhyme and narrowly avoids didacticism, which seems often a temptation.

When he’s dealing with family, his poetry takes on a new intensity as in ‘That Christmas’ a poem where the imagery controls and heightens the intensity of the experience. Here Ladd shows without telling, without recourse to abstractions: ‘Their conversations swim on / trying to get somewhere in the surf, / old patterns pulling them back. / there are rips out there….’ ‘Love Song with Swallows’ is a delicately understated yet sensual poem where he captures the urgency of love. Less compelling is ‘Old Love Song’ which seems trite and prosaic by comparison, lacking tension. Perhaps this is intentional, though, given the content of the poem, dealing as it does, with love that has become wellworn, yet harmonious in its very dependability.

Returning to the idea of transitory passages and the title of the collection, one finds an explanation for the placing of ‘London Aubade’ at the very beginning. The unexpected onset of a daughter’s first menstrual cycle is an unusual choice for an opening poem, but in context of the collection as a whole, it’s appropriate as a rite de passage. Set against traffic and rain outside, a momentous personal transition takes place, from childhood to womanhood, yet when placed within a larger canvas, it is seen in perspective. This poem seems to epitomize Ladd’s work which, as Robyn Rowland suggests, is ‘in rhythm with the daily material of life, connected powerfully to varied natural landscapes’.

The incorporation of actual highways, (‘The Bruce’, ‘The Princes’, inter alia) may seem rather obvious in the context of transits and journeys but, as metaphors, they embody Ladd’s preoccupation with inter-connectedness through time, space, generations. Geography cannot separate human beings who learn to live within their limits.

The delicate observation of the ‘she-oaks’ and ‘their redgold autumn tassels’ recalls ‘Headlands 1’ where the ‘peasantthighed’ she-oak, ageless and timeless, ‘leaves a fine rain of connection’ and its ‘..song will tell you / who you are.’ Unlike ‘Philosophical Autumn’ which seems hackneyed, almost trite, the observation of ordinary details in many poems is often more complex than is initially apparent. In ‘The Bruce’ there are everpresent menaces, reminders of death and other hazards which, on most highway journeys, threaten our vulnerable humanity: ‘At the crossroads the sky sweats, / a house stands biblically alone in the clearing- / Under its stilts lies the snake / and in the frangipani’s shade.’

Even though we are all ‘in transit’, Ladd suggests, there are ways of becoming attuned to the dualities of living.

Janet Upcher lives in Hobart where she’s a teacher, editor/translator, reviewer and writer of poetry and fiction.